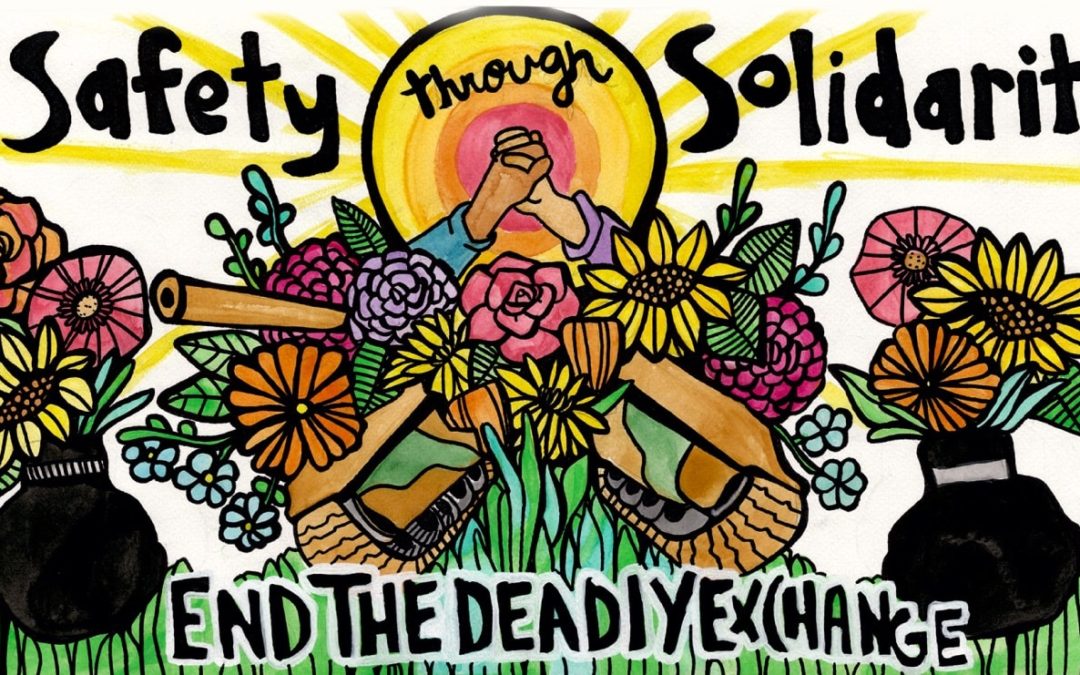 JVP activists are holding demonstrations in 15 cities across the country today, calling on the Anti-Defamation League to end “Deadly Exchange” programs between U.S. and Israeli law enforcement officials.

In a letter delivered to ADL Director Jonathan Greenblatt this morning, JVP Executive Director Rebecca Vilkomerson requested a meeting to discuss why hundreds are taking action today and 20,000+ people have signed a petition calling for an end to these dangerous training programs that perpetuate discriminatory, repressive and violent policies in the U.S. and Israel.

For the last decade, under the banner of “counter-terrorism” training, the ADL has brought more than 200 top-ranking U.S. law enforcement officials, including police chiefs and ICE officers, to Israel to train with Israeli police, military and intelligence agencies. The ADL has also brought those same Israeli forces to train with more than 1,000 US police, ICE and border officials in the U.S.

These programs share dangerous technologies, and practices in both directions: bringing paramilitary tactics to U.S. policing and broken windows discrimination to Israeli policing.

Actions will be happening throughout the country all day today. Along with deliveries of the petition text, activists are hosting speak-outs on the links between policing here and Israeli Occupation abroad, sharing testimonials gathered from Palestinians, Ethiopian Jews and others impacted by Israeli law enforcement, and communicating the message: “Safety through Solidarity: Not Policing or Occupation. End the Deadly Exchange.”

Rebecca Vilkomerson, Executive Director, JVP:
“With antisemitism, Islamophobia and racism on the rise these days, we need organizations fighting for the safety of all people. Unfortunately, the ADL’s response to our campaign thus far has been to affirm their commitment to running these harmful programs. With today’s actions, we are asking ADL leadership to understand the deep concern we feel, listen to the real harms caused by their programs, and take immediate action to stop these deadly exchanges.”

Stefanie Fox, Deputy Director, JVP:
“These programs turn Israel’s 70 years of dispossession and 50 years of Occupation into a marketing brochure for successful policing. We want to end Israel’s human rights abuses, not hold them up as a model.”

Asaf Calderon, JVP activist in New York City:
“As an Israeli immigrant to the U.S., I’ve seen racial profiling of black and brown people with my own eyes from the security in Ben Gurion airport to random detentions in the subway in New York. I find the fact that law enforcement agencies in both countries are building on each other’s experience of racial discrimination appalling, even more so when these programs are run by a so-called civil rights organization.”

For more information on the campaign: deadlyexchange.org

Jewish Voice for Peace is a national, grassroots organization inspired by Jewish tradition to work for a just and lasting peace according to principles of human rights, equality, and international law for all the people of Israel and Palestine. Jewish Voice for Peace has over 200,000 online supporters, over 60 chapters, a youth wing, a Rabbinic Council, an Artist Council, an Academic Advisory Council, and an Advisory Board made up of leading U.S. intellectuals and artists.